Li Sha was experiencing frequent hip and lower back pain after running a certain distance. The pain was slowing her down as it made her legs feel heavy, causing her difficulty in taking wider strides. This affected her performance negatively and made it unpleasant for her to run long distances.

She was referred by her coach Kien Mau to Jordan, our Physiotherapist in charge of Running Gait Analysis at Core Concepts. 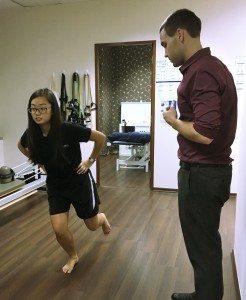 At the initial Running Gait Analysis session, Li Sha expressed that her goal was to run 5km without feeling pain in her hip and lower back as she enjoys running longer distances but was unable to do so due to the pain.

After going through the initial assessment and running analysis, various muscular imbalances and weaknesses were identified. Muscle weakness was a contributing factor to the pain due to overuse and overexertion of muscles to compensate for the weaker ones. After a thorough analysis of results, appropriate exercises were prescribed by Jordan to strengthen the respective areas.

After a round of physiotherapy sessions and a follow up Running Gait Analysis session, we caught up with Li Sha to check on her progress. She shared that her pain takes a longer time to kick in when running and the level of pain felt has also reduced significantly. The absence of pain has also lead to improved running performance and timing.

When asked about her feedback of Running Gait Analysis, she said that the service has helped her to learn more about the way she runs. As she has never seen herself run before, it was an eye-opening experience for her to see the way she runs and getting bad running habits pointed out.

Through that experience, she was able to make a conscious effort to correct the bad habits. She also pointed out that the Optogait data collected was crucial in helping to measure progress made from the first session.