Imagine a tight rope being repeatedly rubbed over a rock, constantly snapping back and forth. Overtime, the fibers fray and eventually fail. This mechanism is similar to most degenerative tendon processes, including that of the Tennis Elbow. 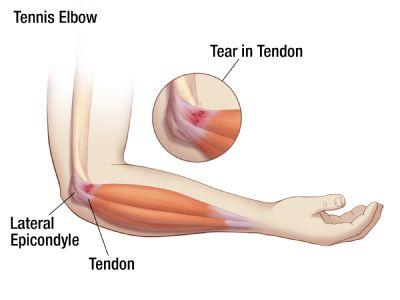 Tennis Elbow develops when the tight band of tendons of the forearm muscle repeatedly rubs over the bony prominence at the elbow (lateral epicondyle) during bending and straightening of the elbow. This leads to micro tearing of the tendon, and subsequently inflammation and pain.

Why does tendon degeneration happen?

Therefore, people whose job or sport requires gripping coupled with movement through the elbow, like tennis, would be at risk of developing this condition. However, contrary to popular belief, tennis elbows not only affects tennis players but also sportsmen such as cricketers and weightlifters where there are similar physical demands.

For others who are more sedentary, it can be as simple as a weekend of spring-cleaning, where you are repeatedly carrying boxes and moving furniture back and forth, when pain in the elbow hits you. Simply, any excessive exertion that the forearm muscles are not used to, can put one at risk of developing this condition regardless the duration of exertion.

What are the signs and symptoms of Tennis Elbow?

All degenerative overuse tendon conditions go through similar phases. It typically begins with inflammation from the initial irritation of the tendon and overtime progresses to degenerative changes occurring and the eventual failure of the tendon, depending on how well it is managed in the early stages.

The accompanying signs and symptoms of the Tennis Elbow can be described in two phases.

Related: Rock Climbing: The Guide to Getting Started for Beginners

How can physiotherapists help?

The early phase of Tennis Elbow is often referred to as the inflammatory phase. Pain is managed primarily with rest and medication. Movements involving repetitive movements around the elbow should be avoided to allow inflammation to settle down. Electro-modalities such as ultrasound and regularly icing can also be used to speed up the healing process. Athletes who are heavily involved in sports requiring use of their elbow and wrist such as tennis players or cricketers will have to rest completely for a couple of weeks.

At this stage, it is also necessary for tight muscles in the forearm to be released to help offload the tension on the tendon, reducing the tautness around the bony prominence. Taping techniques can facilitate further reduction of the irritation around the elbow.

As the condition gradually progresses, exercises to strengthen the tendon should be done to prevent recurrence of this condition. A physiotherapist would be able to ascertain when it is appropriate for you to start on these exercises without potential flare-ups of the inflammatory response. The ultimate goal is to have pain-free movements, and for return to sport and occupation as quickly as possible.