The risk behind Scapula Winging or a Protruding Shoulder Blade

Introduction to the Scapula Bone

We zero in on one of the most common presentations in a dysfunctional shoulder — scapula winging. The scapula is a bone plate not unlike the shape of a triangle that rests on the ribs of the upper back, held up by an array of muscles.

How to identifying Scapula Winging 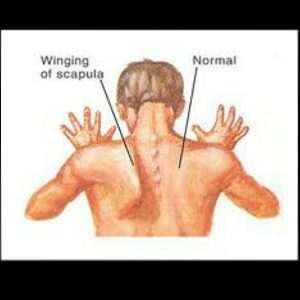 Scapula winging occurs as a bony protrusion along the spinal region of the scapula, whether at rest or during movement. While its appearance can cause alarm, rest assured it is usually the result of a weak serratus anterior muscle that fails to anchor down the shoulder blade.

We must first remember that our muscles do not operate singularly or independently — rather, muscles work together, in tandem with others to achieve mobility and maintain body stability. The serratus anterior is no exception — it stabilises the scapula and facilitates its upward rotation by engaging other muscles. This muscular mechanism helps you reach overhead or bear weight with minimal strain to the shoulder joint.

When the Serratus Anterior system fails

Imagine a large gear in a clock, unable to move — the surrounding gears will have to work even harder to keep the clock ticking.

That’s what happens when the serratus anterior muscle is weak. The tandem muscles, such as the upper trapezius or levator scapula muscle, work harder to compensate for the shortfall in powering the upward rotation, eventually causing tightness along the top of the shoulder, side of the neck or base of the skull.

Additionally, a weakened serratus anterior leads to lower stability for the scapula; the scapular then loses its anchor and protrudes like a wing.

There are many different theories that point to how serratus anterior muscles become weak. The 3 most common are:

Like any muscle rehabilitation, treatment is usually centred on the aim of muscle strengthening. To overcome scapula winging, a series of progressive exercises are usually prescribed, starting with a wall push-up that gradually requires bearing weight in a four-point kneeling position.

Progressing the exercises are important, not just for strengthening the key muscles, but also engaging the other tandem muscles. Particularly the upward rotator muscles, so that motor control (neuromuscular) is established and/or re-trained.

Experiencing shoulder pain? Click here to find out more about physiotherapy for shoulder pain relief and how Core Concepts can help