A large number of people who seek medical help for their musculoskeletal problems usually present with neck, shoulder and back pains. These clients are often deskbound at work and with the increased use of computers, it is no wonder the incidence of spinal pains is on the rise.

The repetitive stress associated with our work environment can be minimized with an understanding of the flaws of mass-produced furniture, combined with a little effort and common sense in altering and re-organizing our work station.  Below are some of the complaints most office workers express. 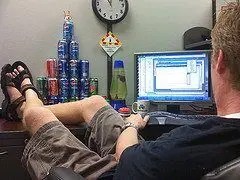 Most tables and workbenches are made far too tall for our Asian build as the parts to the furniture are cut to Anglo-Saxon fit.  Most table-heights are at 75m to 80cm high, were as 69 cm is more appropriate for Asians.  This means that for the majority in Singapore, people are working with their arms elevated and stretched forward, leading to overuse and constant activation of their Upper Trapezius and Levator Scapulae. These two muscles are designed to be movers – to raise the shoulders or to pull the head back to the centre.  They perform very poorly when tasked to doing activities that require muscle endurance like elevating the arm up constantly as demanded by the current work station design. The result is the development of trigger points and tightness in these muscles, consequently increasing the compression in the cervical spine leading to pain.

I have been told to sit into the back of the chair to improve my posture at work, but as much as I try, I always end up sitting on the edge of the seat.  It just feels more comfortable.

Most chairs used by office workers are regular non-ergonomic chairs.  Similar to the issue above, unless it is an ergonomically designed chair, the office chairs are designed very poorly for the Asian population.

Firstly, seat-depth.  The median thigh length of a Hong Kong Chinese male is 550mm and that of a British Caucasian male is 595mm. The difference between the two ethnic groups is significant. Unless the depth of mass-produced chairs is made adjustable there will be many people whom the chairs do not fit.  In Singapore, most chairs are too deep.  One should be able to sit all the way into the back of the chair and have a gap of 2-3inches between the edge of the seat pan and the back of one’s knees. Failing this, the user will sit forward and away from the backrest, resulting in the loss of the lumbar support and promoting slouch sitting. If the user maintains sitting into the back of an oversized chair, he or she will have to work with out-stretched arms.  This will eventually lead to overuse in the muscles around the shoulders.

Secondly, fixed armrest. One of the commonest issues with armrest is that most are not adjustable. Armrests often get in the way when the user draws the chair closer towards the work station, limiting how close the user can get to the table without losing her back support. To counter this, the user either stretches out her arm causing a flexion in the upper thoracic spine and consequently a forward head posture or move away from the back support.  If purchasing an ergonomic chair is out of the question, and the current armrests are not adjustable, it is better to not have it. In my opinion, I feel it is better to discard the armrests and draw the chair in close and have the arms rested on the table.

Lastly, feet support.  Ideally, the tabletop should be at the same level as the elbows. To achieve this, more often than not, the height of the chair will have to be raised.  As tables are already made too high and Singaporeans being generally petite, the combination of raising the height of the chair of a chair that is already too deep result in the feet not being fully supported. The lack of support forces the abdominals work.  As it is uncomfortable, the user will naturally slide forward.  Therefore a footstool must be used if the chair does not have a footrest.

After working on the laptop for an hour, I get headaches and neck pains.  However, if I use the desktop, I seem to be able to work longer without discomfort.

The use of laptops for work is widespread. However, the screens on laptops are too low without having the head in a forward position. In the head forward position, the upper cervical is in extension and C1-3 are compressed.  As C1-3 refer pain to various parts of the head, clients can perceive the pains as headaches. Ideally, the first line of the computer screen should be at eye level and this is easily solved by using a laptop riser that can be purchased from computer shops.  It must be noted that typing on the keyboard that is in the incline position can result in carpal tunnel syndrome and wrist pains. We recommend that clients purchase and use a separate keyboard to minimize injuries to the wrist.

Along with the low screen, the keyboard on the laptop is smaller than a standard keyboard. With a smaller keyboard, the user’s shoulders are protracted and adducted, leading to future risk of injury to the shoulders and neck. Ironically, manufacturers are now reducing the size of laptops aggravating the situation further.

There are some contentious issues with some of the ergonomic guidelines. One such issue is the hip angle of the user.  It is now recommended that the hip angle should not be at 90 degrees, but between 110-130 degrees. This is because it is found that the discal pressure in the lower back reduces as the hip angle increases, which follows that ideally that the chair should be adjusted such that a hip angle of 130 degrees is achieved. However, in that angle the cervical spine has to flex forward for it to be in an upright position thus affecting the superficial cervical flexors like the sternocleidomastiod muscle. It also increases loading at C6-T1 level.  Both of these factors can lead to cervical pains.  Therefore, in the case where chairs are without headrests, perhaps the user should adjust the hip angle to 110 degrees. If headrests are available 130-degree hip angle is fine as the head is completely supported.  Another point to note is the user’s primary complaint.  If the main problem is in the cervical spine, positioning the hip angle at 110 degrees is preferred.

Another issue of contention is the use of a tray table for the keyboard.  Some would argue that a tray table is essential and that keyboard should never be placed on the table.  The rationale for this argument comes from having the shoulders dropped and relaxed while working as most tabletops are too high.  However, the drawback with the tray table is the lack of room for the mouse.  The mouse should always be placed right next to the keyboard to minimize outstretching of the arm.

In essence, although ergonomics is about maintaining the ideal body posture while we work, this should be achieved with as little physical effort as possible. How this is done is open to one’s creativity and presenting situation and environment. Ergonomics is very personal, the guidelines are readily available but there are no hard and fast rules. Adopt them only if it feels right for you. 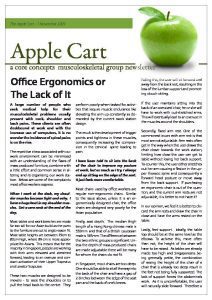