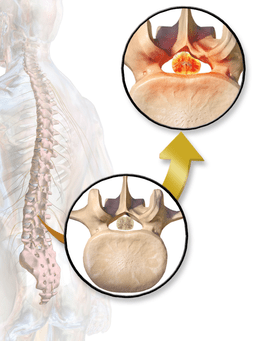 Motor Control Strategies In The Management Of Stenosis

This case study looks at a client who had poor posture in standing and walking and had symptoms of canal stenosis. She also had very poor motor control, poor stability in her transversus, pelvic floor as well as altered breathing pattern. She was treated to improve her motor control around the trunk, and as a result showed tremendous improvement.

Allison1, 68, was diagnosed with spinal canal stenosis with bilateral leg pain and numbness. Allison, a mother of two and a grandmother of one, helps with housework and her daily activities include watching TV and a little laundry. Her physical fitness is poor and she does not exercise. Her son noticed that her abdominal had become more distended over the last 3 years. This coincided with the onset of her pain and numbness.

Allison’s complaints and symptoms include:

Generally, her symptoms of stenosis and dysfunction have been increasing after a holiday trip that required much walking 3 years ago. Her current aggravating factor is ‘walking for 10 minutes’ . It is eased by ‘lying or sitting down’.

posture: Allison stands in a swayed back posture, with excessive spinal lordorsis and locked knees. Allison also has mild scoliosis.

Lumbar spine mobility: All AROM were full and pain-free, with the exception of the extension which felt blocked. This is because the lumbar spine was already in a fair bit of extension in a standing posture.

MRI: Multi-level degenerative disc disease. L4/5 was the most severely affected level with a severe diffuse disc bulge, as well as ligamentum flavum hypertrophy and facet joint dysfunction. Overall. marked severe narrowing of the central canal, bilateral lateral recesses, as well as mild narrowing of the inferior aspect of both neural foramina, are seen at this level.

Hypertrophied and increased tension in lumbar spine extensors around L1-5.

Allison is unable to dissociate her lumbar spine from her thoracic spine and hips.

Breathing pattern: abdominal breathing. On inhalation, her abdominal distends. Allison is unable to achieve lateral costal expansion of the lungs. When asked to correct pattern, Allison switches to apical breathing

There was an inability to activate the pelvic floor or transversus abdominus. Attempts at drawing in the abdominal wall and the pelvic floor were made by bracing and breath-holding. Weak gluteal muscles.

Initially, treatment for her stenosis involved a combination of different modalities and focused on the primary area of pain. Manual therapy was performed on the overactive extensors to reduce the tension and to restore normal mobility around the lower back. Exercises such as the pelvic tilt were taught to allow conscious dissociation of the lumbar spine from the thoracic and hips. Other stretching and range of motion exercises were also taught to maintain her mobility and achieve a neutral spine position.

The second phase of the management involved the client in developing an effective trunk stabilisation pattern. Trunk stabilisation involved re-education of the primary stabilizers which involved lateral costal breathing and isolation of low effort pelvic floor, transversus abdominus and multifidus muscle contraction. This was done in the supine position and separately to start and was progressed to co-contraction of all the stabilizing muscles in functional positions especially in standing and walking. Posture re-education and joint awareness of her lumbar spine, pelvis, knees were practised with bio feed-back such as in front of the mirror.

Once Allison was able to contract the pelvic floor, transversus abdominus and multifidus and perform lateral costal expansion, the 3rd and final phase of the management were carried out. This phase involved strengthening of the secondary stabilizers, such as the gluteal muscles, lat dorsi, and the external and internal obliques.

After 3 months of physiotherapy, initially with a frequency of once a week for 5 weeks, later reduced to once every 2 weeks, Allison can now walk distances of 1km without pain. Her body awareness is now better and no longer stands in a swayed back posture.

This case illustrates the effectiveness of a multi-approach system in solving this client’s stenosis. In this instance, the role of manual therapy was to prepare the structures to adopt the new more neutral posture by increasing flexibility and “give” in the soft tissues and facet joints.

The improvement gained from the above cannot be sustained if the poor motor control present in Allison was not addressed. Moreover, the role of the transversus abdominus and multifidus. However, recent literature has shown that the pelvic floor and the pattern of breathing are just as important in the stabilisation system. A good analogy is to liken the trunk to a soft-drink can. The top of the can is the diaphragm, the bottom of the can is the pelvic floor and the side, transversus abdominus. The multifidus stabilizes the spine at the intervertebral level.

The idea of stabilisation (apart from the multifidus) is to increase the intraabdominal pressure within the abdominal cavity. This is only possible if transversus can contract in a system where there is good tone in the pelvic floor and normal functioning of the diaphragm.

The lack of trunk stability likely led to the over activation of her back extensors that were then recruited to compensate for the deficiency. This would have led to the increase in extension of the lumbar spine, and hence her resultant posture and stenosis.

1. Not her real name