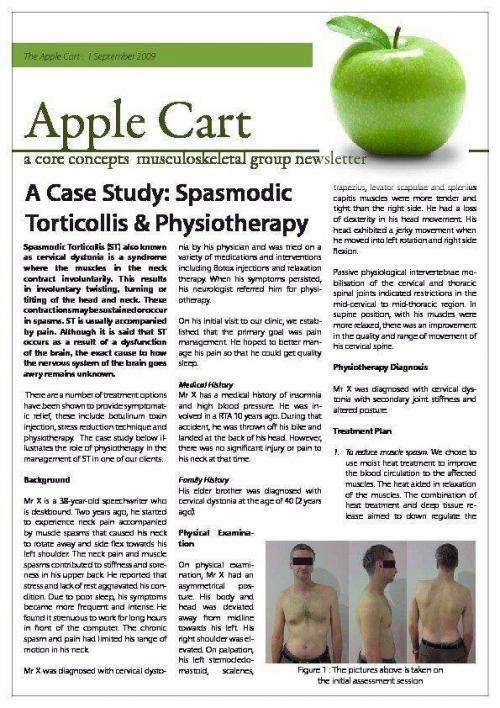 There are a variety of treatment options that have shown to provide symptomatic relief. These include botulinum toxin injection, stress reduction technique and physiotherapy. The case study below illustrates the role of physiotherapy in the management of ST in one of our clients.

Mr X is a 38-year-old speechwriter who is deskbound. Two years ago, he started to experience neck pain accompanied by muscle spasms that caused his neck to rotate away and side flex towards his left shoulder. The neck pain and muscle spasms contributed to stiffness and soreness in his upper back. He reported that stress and lack of rest aggravated his condition. Due to poor sleep, his symptoms became more frequent and intense. He found it strenuous to work for long hours in front of the computer. The chronic spasm and pain had limited his range of motion in his neck.

Mr X was diagnosed with cervical dystonia by his physician. He tried different medications and interventions. These included Botox injections and relaxation therapy. When his symptoms persisted, his neurologist referred him for physiotherapy.

On his initial visit to our clinic, we established that the primary goal was pain management. He hoped to better manage his pain so that he could get quality sleep.

Mr X has a medical history of insomnia and high blood pressure. He was involved in a road traffic accident 10 years ago. He was thrown off his bike, and landed on the back of his head. However, there was no significant injury or pain to his neck at that time.

His elder brother was diagnosed with cervical dystonia at the age of 40 (2 years ago).

On physical examination, Mr X had an asymmetrical posture. His body and head was deviated away from midline towards his left. He had an elevated right shoulder. On palpation, his left sternocledomastoid, scalenes, trapezius, levator scapulae and splenius capitis muscles were more tender and tight than the right side. He had a loss of dexterity in his head movement. His head exhibited a jerky movement when he moved into left rotation and right side flexion.

Passive physiological intervertebrae mobilisation of the cervical and thoracic spinal joints indicated restrictions in the mid-cervical to mid-thoracic region. In supine position, with his muscles were more relaxed, there was an improvement in the quality and range of movement of his cervical spine.

These exercises were shown to help him to reduce his neck muscle spasm during movement.

Mr X’s neck pain subsided after 6 sessions of physiotherapy. He was able to sleep better after the second session. After 2 months of physiotherapy intervention, Mr X started to show improvement in his back and neck posture. His back and neck posture is now less deviated away from the midline. He also reported that he is able to turn his head with a less jerky movement.

In the course of our management of Mr X’s condition, we noticed that exercises that activated his deep neck flexors coupled with movement tended to improve the smoothness of his head movement. One such exercise is placing a ball between the head and the wall and doing neck rotation in standing against the wall. The goal is to exert enough pressure on the ball without dropping it during movement.

Such exercises have so far shown some potential in reducing his neck muscles spasm during movement thus allowing him to move and control his head in a smooth motion. The exercises seem to have a longer carry-over effect for reducing the muscle spasms during movement. By being able to activate his deep neck flexors, it not only improved the stability of the cervical joints, but it also resulted in a relative increased in flexion.

This increased flexion in the mid and upper cervical spine reduced the facet joint compression hence reducing pain. As painful stimuli are received and processed by the basal ganglia, the synaptic changes provoked by pain may lead to the abnormal physiology underlying dystonia in the first place. Therefore as the pain provocation reduces, the input to the basal ganglia reduces thus possibly reducing the effect of his dystonia (Dauer et al, 1998).

From our observation, he is always able to activate his deep neck flexor better whenever his sternocleidomastoid is less excited. This is always effectively achieved through cervical mobilisation. This phenomenon was supported by a study done by Sterling, et al (2001). In that study, they investigated the effects of cervical spine mobilization on the deep neck flexors. A decrease in EMG activity in the superficial SCM muscle was observed. This resulted in an increase in deep neck flexor activity.

Reduction In Postural Deviation From The Midline

We also noted that by doing the single-leg balance with neck activities, we are able to reduce his postural deviation from the midline. However, these sets of exercises only have a short carry over improvement after exercise. In our opinion, in performing a single leg balance, we could be stimulating to his vestibular system which in turn may reduce his neck muscles excitability. This is concurrent with the findings by Rosengran and Colebatch (2006) who investigated the effect of vestibular stimulation on patients with cervical dystonia. It was found that vestibular stimulation could reduce neck muscle activity in cervical dystonia and give symptomatic relief.

In summary, with the growing knowledge of rehabilitative exercises, physiotherapy is able to provide both symptomatic relief and better management of Spasmodic Torticollis. Liked this article? Have a read of our other case studies here